Dr. Michael O’Neal applied his passion for providing quality patient care to a new business concept, creating his own unique practice of “membership medicine,” breaking ground in a field that, he says, has many followers but not enough leaders to challenge the status quo. 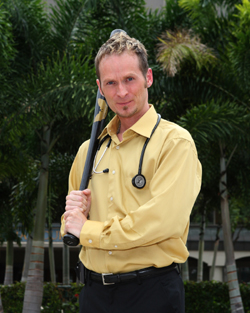 “It’s cliché, really, but going into medicine was more of a calling than something acquired,” O’Neal explains. “I knew from a young age that I wanted to be a physician.” The last O’Neal in the medical profession was a field surgeon during the Civil War, so it wasn’t family tradition that lured young Michael into a career as a doctor. However, O’Neal’s father, a professor with a Ph.D. in biology, fueled the dream: “He introduced me to science at a very early age. This stimulated my curiosity for the life sciences.”

O’Neal also credits Timothy Ganey, Ph.D., an orthopedic researcher, and John Ogden, M.D., former Chief of Orthopædics at Yale University, as being instrumental in helping him develop a scientific thought process and preparing him for medical school. He added that a medical mission to Ecuador and his work at the Shriner's Hospital for Children in Tampa “helped humble me and reinforced an altruistic focus.”

A Minnesota native, O’Neal received his undergraduate degree in biology from the University of South Florida, with medical school training at the Kansas City University of Medicine and Biosciences. He completed his residency at USF’s College of Medicine and served as Chief Resident. He has received recognition for his scholarly achievements, research and other contributions, including the American Medical Association’s Young Physician Leadership Award.

“I have a strong work ethic,” he says. “(My) story is not about prestige or money. It’s about innovation and promoting change.”

O’Neal wanted to do something different within the medical field; he just didn’t know which business model would fulfill that desire. Then, during his first year of residency at USF, he heard about the concierge approach. In concierge medicine, patient subscribers pay an annual fee which supports a low-volume practice environment: doctors and staff are able to provide more time and energy to fewer patients. Potential benefits include a more collaborative relationship between the physician and patient, with a personalized emphasis on preventative care. “It was appealing to me,” he said. “It would allow me to better manage my time and provide better care to my patients. I had at least 2000 patients as the USF chief of family practice.”

The Seattle doctor that developed concierge medicine in 1996 was the team physician for the NBA Supersonics. “He created the concept,” O’Neal explains, “because he realized the level of service to pro athletes was different than what the general public gets—so why not develop something we can offer to anybody?” That initial model created an elitist perception. O’Neal insists it doesn’t have to be perceived that way; he prefers the term “membership medicine.” It is just one dialect, a different version of the same idea. “Controversy is the stimulus for change,” O’Neal points out. “This business model has been around for twelve years now. Less than one percent of physician practices are set up this way—it is in no way a threat to more traditional medical structures.”

O’Neal strongly believes that healthcare reform should include “the voice of proactive physician dissenters whose priority is to transition power back into the hands of the patient and physician, expanding choice and diversity.” He clarifies, “Our system produces new doctors that are not sufficiently prepared to become major contributors to reform. Physician-entrepreneurs are in the minority. Young physicians tend more to assume the role of follower and not leader; they are a byproduct of the system.”

O’Neal found that the USF family medicine residency program offered a small amount of business training in the curriculum, so he educated himself along the way. “It took me three years to write the business plan.” He cites on-the-job experience as an important teacher and relates how it’s all worked together for him. “I was born an entrepreneur, trained to be a physician, and now I’m learning to be a businessman.”

This is one entrepreneur who refuses to fail: “I do not get distracted by obstacles. I stay focused on my goals and I do not worry what other people think.” He also has a tendency to do everything himself, a potentially exhausting trait that hardworking go-getters often share. He says that he can now spot the red flags when he’s slipping into that pattern, and while it’s still difficult to relinquish that control, he’s learned over the last few years to distribute the workload. 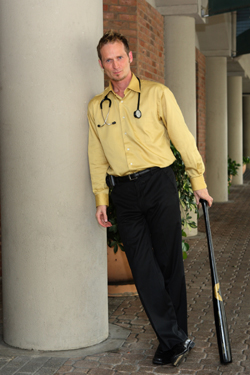 One person who helps shoulder the challenge of running a membership medicine operation is CooperativeMed’s CFO, Steve Chewcaskie. “Steve never gets any attention,” says O’Neal, but his contribution is enormous, especially with his past experience in marketing and finance with companies including Bell Atlantic and Hertz, and current work with Turneffe Direct Marketing Group.

O’Neal discovered his talents when Chewcaskie was his patient in the days before CooperativeMed: “His business savvy always intrigued me. I said to him, ‘Someday we should work on a business plan together.’ Steve understands and believes in the concept. His professional background is very valuable.” In fact, any budding entrepreneur whose core skill set does not include a grounded aptitude for business would do well to find a partner, mentor or advisor who can support that function, at least initially. With an MBA in finance and a significant amount of corporate experience at the executive level, Chewcaskie is O’Neal’s go-to guy when he needs a sounding board or is considering implementing new ideas.

On maintaining a workplace environment that keeps O’Neal’s mission on track, staff members witness his passion and dedication daily: “It spills over without me having to say anything. It empowers them without words.”

Putting his new practice together from scratch and maintaining momentum was like swimming upstream. “I started with no capital, no patients, no ability to advertise,” he recalls. “Everyone thought it was impossible. No banks gave me loans. It’s been media attention and word of mouth.” The drive to succeed was so strong and the financial limitations so great in the early stages that O’Neal found himself sleeping in his car and office to make ends meet while getting his monumental enterprise off the ground.

Even after hitting the half-decade mark, CooperativeMed keeps its founder on his toes. O’Neal sighs when contemplating whether or not the learning curve is behind him. “That’s a tough one,” he admits. “Feeling like you’ve got everything in control engenders complacency. I feel like I have to be on top of my game every single day. I love being a physician. I refused to be put into a position where I didn’t want to go to work each morning. I worked so hard to get into medical school and to be a doctor. I’m frightened that I won’t live up to my own expectations or my patients’ expectations.”

O’Neal laughs when asked if he ever had second thoughts about charting new territory in the medical practice field. “I was naïve to the business side initially. If I’d known (what it would be like) I would have turned and run the other way. That’s why I think what I’ve achieved is not about money—it’s about being an innovator, a trail blazer. I want to motivate young physicians to explore the entrepreneurial side. I would like to see more young physicians challenge the status quo. It’s essential that they promote change.”

He refers to his involvement with the team: “I may be the youngest doctor in baseball. I became their primary care physician formally in 2003. I coordinate care for major and minor team players. The major league team comes to Florida nine times a year to play the Rays. I travel about twice a year with the team. I’ve incorporated them into my practice so they’re not a distraction from my other clients.”

O’Neal played a variety of sports throughout school and into his college years, so during those rare leisure moments, outdoor activities often get his attention. But what he really enjoys is writing: “For me, it’s therapeutic. I’ve published medical articles in journals around the world. Writing is a tremendous escape for me.” He also lends his time and expertise to community organizations, including the Winning Inning Foundation board and playing guest lecturer at opera great Sherrill Milnes’ V.O.I.C.Experience workshop.

O’Neal’s long-term business plan includes operating two or more fully functioning medical membership practices and adding more physicians. Additionally, he hopes to shift some of his focus toward doing more research and lobbying politicians on sensitive health care topics. “When I came out of my residency, I had no idea, desire or even a remote thought that I’d be a lobbyist,” he says, “but immediately upon launching the concept, I discovered that my role would have to be to educate consumers, politicians, other physicians. Six years later, I’m still doing it, but it’s getting easier.”

Today, Dr. Michael O’Neal is considered an authority on the concept of membership medicine. Although O’Neal calls the Tampa Bay area “an average market” for his unique brand of medicine, he’s committed to making it work. He acknowledges that “it’s a much greater challenge here, but the challenge has allowed me to become a better person. I used to think that one person couldn’t make a difference but now I know that it’s definitely possible.”